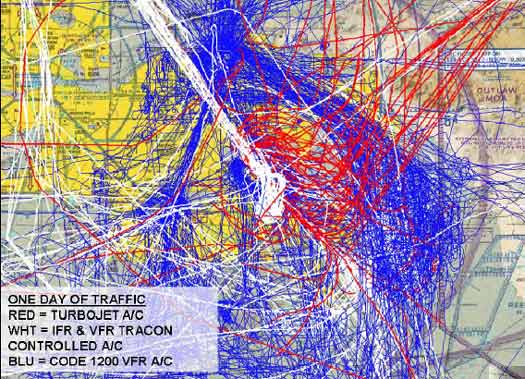 The ad-hoc Phoenix Airspace Users Working Group recently issued some stunning graphics  showing just how congested the airspace in and around IWA in the southeastern Phoenix metropolitan area is becoming.

“Pilots operating in the airspace near IWA should be aware of the density of air traffic operations in the area,” writes Phillip D. Thornton, Air Traffic Manager, Phoenix Terminal Radar Approach Control, in a Jan. 18, 2012, Letter to Airmen. The letter becomes effective in 30 days . “Approximately 800 aircraft operations a day transit the airspace depicted above at or below 5,000’ MSL (excluding Phoenix Sky Harbor traffic).”

Permalink, where you can discuss this: http://aftw.org/wp/2012/01/iwaairspace/